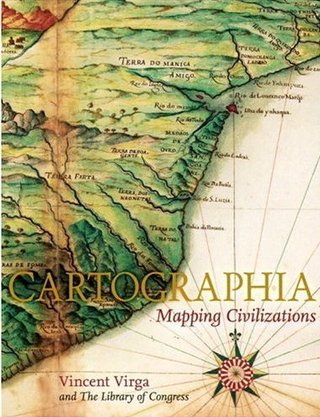 With the advent of MapQuest and OnStar, it’s probably been a while since you’ve had to whip out the old Rand McNally to get yourself situated. But maps can tell us far more than how to get from A to B. They are conduits to a culture’s ethos—or at least they are in Vincent Virga’s Cartographia: Mapping Civilizations, a new annotated compendium highlighting the Library of Congress’s vast array of maps dating from ancient Babylonia all the way up to 21st-century Europe. The beautiful hardbound collection also includes maps that are abstract (like the red state–blue state diagram from the 2000 presidential election), fictional (like Faulkner’s map of Yoknapatawpha County from the first edition of Absalom, Absalom!) and completely unrelated to geography (like the map of the human genome). Some are totally inscrutable: What appears to be a smattering of Popsicle sticks is actually a native map of the Marshall Islands from the 19th century. “Nobody can use it anymore,” laments Virga, who is delivering a lecture tied to the book at the Cooper Union on Thursday 15. “You had to know the surface of the sea, the currents, what happened when the tide hit the shore. That mnemonic died when the British brought in their naval charts in the 1880s.”

Virga, 65, has worked on dozens of titles, including Eyes of the Nation: The Visual History of the United States and The Eighties: Images of America. With his partner of 45 years, author James McCourt, he commutes between a home near Gramercy Park and an apartment in Washington, D.C., near the Library of Congress, where he can often be found researching his next project. It was from his roost in the nation’s archive that Virga spoke with TONY about overcoming cartophobia, his upcoming talk, and how the hand that draws the borders is the hand that rules the world.

Did you always love maps?
Oh God, no. I can’t read them—I’m dyslexic with road maps. About ten years ago I met Ron Grim, who was the head of the geography and map division at the Library of Congress. I said, “I don’t get maps.” He became determined to teach me about them and he changed my life. Now I’m something of an authority. He’ll be at the talk with me.

What are some of the maps you’ll be discussing at the lecture?
One of my favorites—and it’s on the cover of the book under the dust jacket—is the Waldseemüller map from 1507. It’s one of the first maps to use latitude and longitude correctly and it’s the first time America appears on a map as its own continent, rather than randomly stuck underneath Asia. It’s really America’s birth certificate, which is why the library paid $10 million for it.

What about New York City maps?
I’m gonna bring up the earliest known map of Manhattan, which was the first colony where anyone was welcome. And also Saul Steinberg’s famous New Yorker cartoon, View of the World from 9th Avenue. It doesn’t give you an accurate layout of the city and its neighbors, but it speaks volumes about how New Yorkers think.

With GPS and the Internet, is cartography dead?
The science of mapmaking is still alive, but we’ve lost the art. The problem with Western maps, from a cultural perspective, is that they’re all alike. The old maps tell us so much. Some of them lie. Some of them play games. I mean, why is Europe a continent? Because Europeans made the maps and maps are about power.

The library’s map collection numbers in the millions. How did you decide what to include?
Each map I included had to tell us something about the culture it came from. The Chinese had five directions—north, south, east, west and center. The ancient Arabic maps look like geometric patterns. What’s going on there? That’s what inspired me. And I told Ron I only wanted to look at things that were really beautiful—things I’d like to steal or get for Christmas.

Speaking of stealing, is the cartography world still reeling from the Forbes Smiley scandal—the guy who cut dozens of maps out of rare atlases with an X-Acto knife?
Oy vey, the theft of maps is huge. Huge! The top priority at the Library of Congress now is security. They have all these guards who do everything but full body-cavity searches.


Cartographia offers a new way of looking at maps for most of us because we were taught by traditional historians who used them only as way-finding tools. Why?

I am a visual person. I think in pictures. If I need my glasses or my keys, I show myself where they are in my mind’s eye; I don’t tell myself where they are in words. Are you a visual or a verbal person? (Where are your keys right now?) Like me and all of you visual people, maps archive information in pictures. Most historians of all stripes are verbal people, word people with little or no visual literacy. Hence, most history books never use maps as cultural landscapes or social documents; if they do include maps they are usually charts or graphs. Being incapable of envisioning maps as visual metaphors, traditional historians have narrowed map studies for centuries to Who, When, How, and Where the maps were made. About thirty years ago, visually gifted cartographic historians, such as the great J.B Harley, began to ask Why maps were made, what attitudes and ideologies were the mapmakers expressing? A new nature of maps was revealed. Mapmakers were seen as translating ideas into graphic form. Put in historical and cultural context, maps have intriguing stories to tell and each culture expresses itself in its own unique way. This is bliss for a person like me who thinks in pictures! This is the life-enhancing, eye-opening vision of mapping human culture that is Cartographia. And, as Publisher’s Weekly confirmed: I upend the way people think about maps.

As John W. Hessler, scholar and author writes: “The history of cartography is going through a theoretical Renaissance brought about by the work of Harley and Woodward that is moving it in a more theoretical direction--embracing questions of power, author intent and the cultural use of maps rather than just as tools to find directions. This means a more open approach to the definition of what a map is and how it functions as an instrument of power in society and how the power functions semantically in a culture framework. Many in my field however—in fact most of my colleagues--still insist on a positivistic approach to cartographic history—one based in raw fact without any cultural interpretation. What we see in the [New York Times] review [12/2/07 by Fernandez-Armesto] is this narrow minded bias towards what are considered outsiders in what used to be…and thankfully is disappearing—a small field of ‘gentlemen scholars.’”